Carl Gustav, the Gang and the Parking Bandits

Moving musis is out with it’s third Soundtrack release, the 1982 Norwegian cult feature “Carl Gustav, the Gang and the Parking Bandits” A teenage flick set in the outskirts of Bergen. A Band of black dressed greedy corporate thugs are converting all the playgrounds in the area to parking lots. This doesn’t fit well with the local youth, Carl Gustav and his friends finds all the clues, traces down the thugs and get their revenge at the castle finale.
Well respected Norwegian director Ola Solum again hired Pete Knutsen (see also Operasjon Cobra MM02 ost) and his bandmates from Popol Ace for the job to make the score. And the result is a brilliant small group funky rock outfit with plenty of open breaks, quirky instrumentation and interludes. Songs from the film includes vocal tracks by famous Norwegian pop artist Jahn Teigen and the punk group Alle Tiders Duster.

Never before released and remastered from multitrack tapes by Timmion Finland, this score is long overdue but finally available for the first time!

Comes with digital download codes and limited to 500 copies! 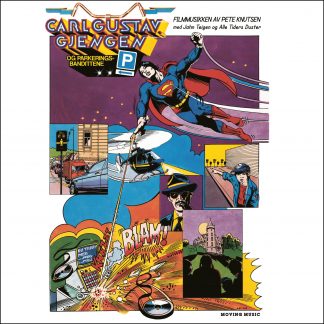 You're viewing: Carl Gustav, the Gang and the Parking Bandits €25.00
Add to cart