“Everyone’s favourite Sudanese collective from London is back with another full album!”

It’s been 5 years since the critically acclaimed debut album from the Scorpios was released on Afro7 records. Since that time the band has stayed busy actively playing around central Europe and in clubs around England.

In 2018 the band released the hit single Mashena earning them massive recognition with DJ’s around the globe, and gaining heavy radio play.

Scorpios aren’t just an instrumental band, one of the key elements in the group’s sound is the mesmerizing voice of Regia Ishag and the groups male voicing by Mohammed and Babo Osmand and Khamal Gourmborr.

LET’S GO was recorded at Abbey Road studios back in 2018, and the album also has two live recordings. Another new key member is Japanese keyboard legend Izumi Kobayashi joining the band pushing their signature sound even further, colouring tones fusing elements of traditional Sudanese music with dub and funk creating that unique groove that makes the Scorpios so great! 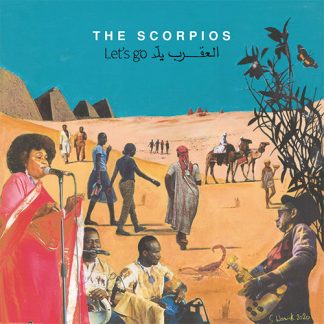