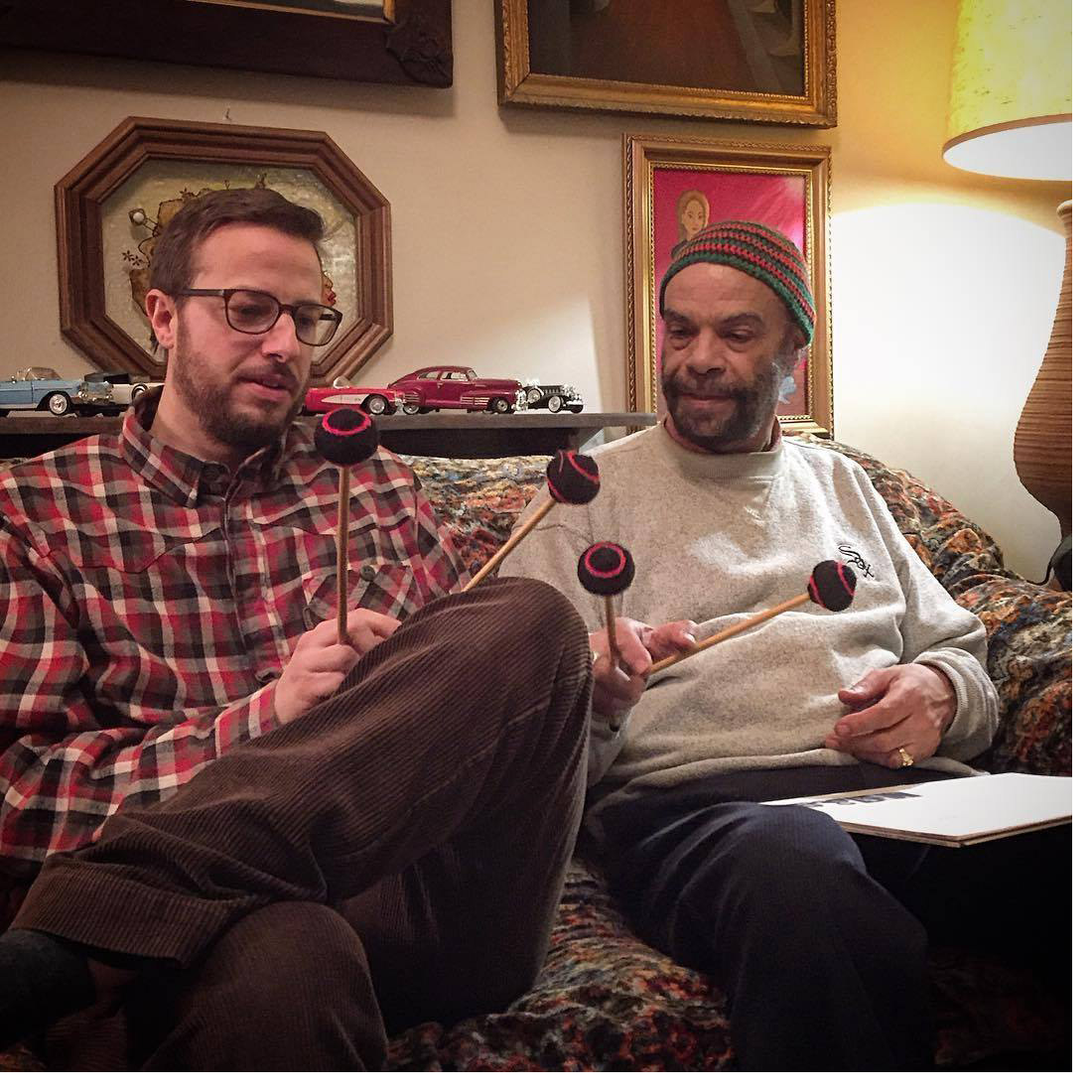 First of all I must say it’s been an interesting and rewarding experience getting your three latest albums out on the street again, sales have been brisk and people have been positive, how do you feel yourself about the renewed interest in your previous recorded music.
I feel grateful that music listeners have shown enthusiasm for my past albums. No doubt, some of these folks weren’t even born when the records first came out. Myself and the other personnel involved on the albums worked hard to make the musical statements listenable and be about something.

Over three decades you released three albums, Quartets in the seventies, Thought Seeds in the 80s and ghost in the 90s. All three albums have your unique individual style but in a way they are all very different. The first one being the bebop album, the second one has a modal, less chord changes approach and finally the Ghost with it’s rhythm and blues touch. Tell us a little how this came to be, was it popular in Chicago of what went down or was this your personal plan from the beginning that you wanted to vary each three releases?
Each album came out sounding the way it did because of the instrumentation I was working with at the time. I didn’t necessarily have making records in mind. Hard to say what was popular in Chicago during the periods when I was recording. Jazz was being played in several different styles. Bop, big band swing, third stream, fusion, funk, easy listening, free music, and probably some more. I didn’t consciously try to settle into any of these categories. I was just playing the vibes and writing tunes. Personally, I like all kinds of music, but I might not play in all those styles. And the other players on the records made a difference, too. The R&B touch on the Ghost album is due to the bass player’s input, and the pianist added some of that flavor, too. Bringing in the vocalist really took things into another dimension.

One thing is that you have worked with a lot of different musicians and line-ups during your career, you first started with reeds but changed to vibes, tell us a little bit about how that came to be.
Playing the vibes came about on the spur of the moment back in the 70s when I was fooling around with the reeds. Alto sax was my instrument. But I wasn’t really feeling it. One night I was hanging out with a buddy and we stopped in a little southside club called the Living Room. A combo was playing and a vibes player was featured. I’d been hearing vibes all the time, of course, but for some reason something clicked that night for me and I decided that was the instrument for me. Sold my horns, bought myself a set of vibes from a guy named Moody at a music shop on East 79th St., and made the transition to happiness. I have melody, harmony and percussion all in that instrument.

Can you tell us a little bit about the Chicago jazz underground scene back in the seventies, as I understand there was no shortage of gigs. Several other Chicago underground jazz artists, have renewed fame the last 10 years, namely Philip Cohran, The Musra Brothers. Also more famous The Pharaohs, Art ensemble of Chicago and Sun Ra. Was the scene joint in a way did you have cross paths with any of these constellations?
You can be sure there was really a jazz scene going on back in 70s. “Underground” is a good term to use, but that underground sure was popping. The bands had followings and there were places to play; not just in taverns, but in artists’ lofts and galleries and house parties. To mention something in particular, a girl named Max Fran always kept some kind of loft where she did her art, and we played some good sets at her place. We even got hired to play for corporate events. Sure, I remember the players you mention, and of course there are some not mentioned. To say each band had its own “clique” might be a questionable statement, but that’s how it seemed to me. And there’s nothing wrong with that. Music got played and things got done.

How is the music scene today compared to back then, you have switched to keyboards instead of vibes, what are the pros and cons of using a much lighter instrument.
The music scene in Chicago today is hard to see and hear. I have no idea what people, in general, are listening to. They wear earphones and don’t talk, except on their cell phones. I seldom hear music out in the air anymore. The only time I might hear music in the general commerce world is when I go to this resale store on the west side. They jam their box in there. Other than that, I usually just hear the background industrial hum of the city. I very seldom see flyers advertising little gigs like we used to put up in the old days. They have big outdoor fests in the summer now, like Lollapalooza but our style of music doesn’t fly on those scenes. Jazz Fest Chicago, put on by city government, still happens in September. And there are some neighbourhood fests here and there. I’ve been told by younger people that all the action is contained inside the Internet now. I started playing the electronic piano just to have something new to do. Got a bunch of new tunes and the reception has been good for the little trio we got going. The vibes always present a challenge when it comes to amplification. In the studio you got all the right microphones and stuff, but out on the scene that’s seldom readily available. And, too, I can pick up and carry my piano keyboard with one hand, and be set up and ready to play in five minutes.

On a sad note, the everyday violence and gun situation in Chicago seem to plummet and has put restrains on mobility in your southern area. How has it come to this and how does this affect your everyday life.
I don’t know what to say about the madness and gunplay that’s going on in this city now. The sociologists and the police come up with their ideas on how to deal with the situation, but the blasting continues. Had a stray bullet come through my window during Christmas week. All this shooting has definitely put a damper on things. And it’s gone citywide now. The fact that I don’t hear music in the air anymore might have something to do with it, and some of what I do hear from time to time sounds like background tracks for a violent movie.

Tell us a little about your special musical relationship with Kenneth Hill.
Ken and I worked well together. We met at a vibes player named Cooper’s house where we rehearsed all the time. That would’ve been in the early 1970s. Other players would come through and we’d all have a good time. Then Ken and I branched off and started doing our own thing. We lived within walking distance of each other. We compared notes on music method books, analysed tunes, and started building a repertoire. Ken was a no-nonsense kind of guy who liked to tackle tough material. We’d work out for hours on those finger-breaking Bird and Bebop tunes. Then we met Donnell Lambert, the bassist, a really advanced player, and we started rehearsing in his basement. We then brought in drummers, like Ben Montgomery, Usama and Richard Terrell.

What’s the story behind the ‘Lilith came’ track.
“Lilith Came” got written on commission at the request of playwright, saxophonist, Larry Dunn. He wanted a new song about a scandalous woman for one of his plays. I was the musical director and Carol was a featured vocalist. The play was a real other worldly kind of thing with spirits and spiritedly dancers. Carol came up with the melody and lyrics and I put in the rest.

What other jazz artists are your most favourite, in any genre.
I listen to and like lots of jazz artists. I guess my favourites would probably be Charles Mingus, Captain Beefheart and John Lewis.

We found the old Downbeat magazine review of your debut album, it was a bit negative but still in a positive manner saying it sounds unique. How did you feel yourself at the time?
Felt down in spirit when I first read the review, but then I felt good about it. I was surprised, really, that Downbeat, the premier jazz magazine in the world at the time, even paid us any attention, since they probably received tons of material from all over the planet for review. Ken was really shocked to see it. But we both felt encouraged by what the reviewer said, ultimately.

You said you prefer live recordings contrary to studio recording. As the vibe is much more alive and sound more like when you play it yourself?
Well, it’s not such a cut and dried situation. The vibes is a difficult instrument to mike up, especially on live sets. In the studio you can get a good sound. Mikes on top and sometimes underneath. On live sets, all that equipment might not be available, and often times you’re competing with instruments which have volume controls on them. Ampli-pickups can give you some added volume, but they might distort the sounds, especially if you turn the volume up high. So, I do prefer live recordings, but they aren’t always the best. In the studio you have more time and equipment available to make the vibes sound as realistic as possible.

Did you come from a musical background, did you have any family members that where musicians?
I had an uncle who was a pianist, and he led a combo that played in the south. I started out playing piano and reading music when I was around nine or ten years old, but I didn’t really care much about music then. I liked baseball and other sports type things. My interest in music really clicked when I was early high school age. Played in the band and started paying attention to the sounds. Wanted to be an alto sax player, but decided early on that horns weren’t my thing.

What truly is great about your creative output is the collaborations with your better half Carol Sawall. The vocals are very unique and the visual illustration that accompanies the three albums are next level! She is from Detroit right? How did you two first meet and did you start working together early?
Yes. Carol is from Detroit. She’s very much into drawing and painting. She would sing at jam sessions and knock em out with tunes like Joy Spring and Lullabye of Birdland. She’s really a bebop singer. Knows all those old standards. She didn’t start singing with the band Ken and I put together until later, like in the late 70s. She would design our advertising and flyers. Then when the records got made, it was only natural that she did the artwork.

We thank Paris Smith for the time, forthcoming from Jazzaggression and Oracle Records 2016/17 is the Thought Seeds EP and hopefully some unreleased works.